Cross-tabulations are carried out between at least two variables. When such an analysis is done between two variables, then it is called bivariate analysis. 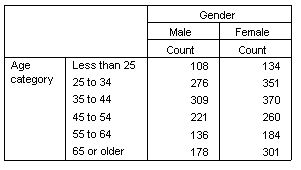 In the above figure, comparison is made between age and gender. But this is very basic comparison (in terms of count only). We can go even further by calculating percentages and even further by finding out the relationship between two variables using the statistical tests such as Chi Square Test.
Lets do it with our own data but make sure that it contains two meaningful categorical variables which we want to cross-tabulate.
Let me do with "demo.sav" which is a sample file in the installation directory. Now we carry out the following steps to cross-tabulate and calculate the value of chi-square test along with the interpretation.

Step 1. Identify two variables for cross-tabulation. It depends on your research objective. For example, if you want to show the relationship between gender and job satisfaction, you have to cross-tabulate between those two variables.
Step 2. Click on analyze
Step 3. click on descriptive statistics
Step 4. Click on crosstabs. It will show the following dialog box 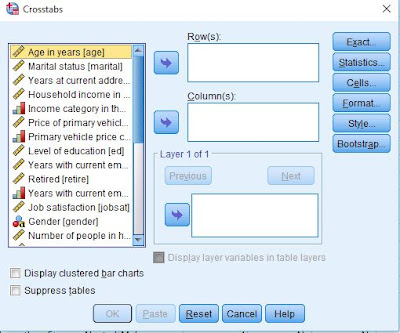 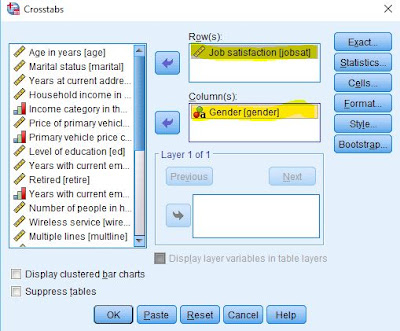 Step 6. Now when we click on ok, we will see a contingency table that shows the relationship between job satisfaction and gender but only in terms of counts. But, if we want to calculate further statistics then we have to click on statistics button which will show the following dialog box. We have to select (tickmark) chi-square option and click continue. 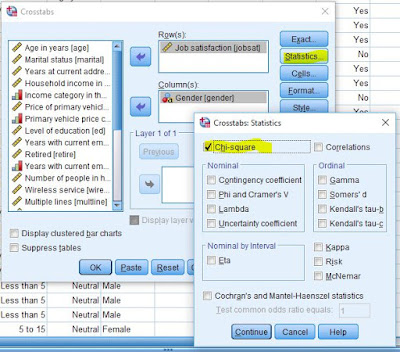 Step 7. Click ok and you will see the following output. 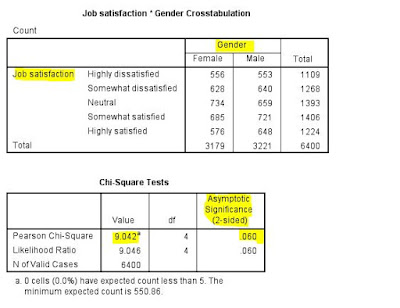 Step 8: In the output, you see two tables. One is the simple cross-tabulation between gender and job satisfaction. You might have already guessed why I had kept job satisfaction in rows and gender in columns, it is to better fit the table in the screen. Another table is about the Chi Square tests. 9.042 is the Chi Square Value at 4 degrees of freedom. The degree of freedom is calculated as (R-1)*(C-1). Here, total number of categories for gender=2 and job satisfaction=5, so (2-1)*(5-1)=1*4=4. We can also take the help of Chi Square distribution table from any statistics book for interpretation.

However, we can also easily interpret by the help of P value from the table which is 0.060 as shown in above table (two tailed test). It means, when we set 5% level of significance, the calculated P-value i.e. 0.06>0.05 so, relationship between gender and job satisfaction is not statistically significant. However at 10% level of significance, the calculated P-value i.e. 0.06<0.1, so their relationship will be statistically significant.
Note: We can show the percentages in the table too by clicking on the cells button after clicking on crosstabs. Again it depends on our research objectives. Similarly, we can also show the expected frequency as well instead of the observed frequency.

Good luck and see you in the next tutorial!