Steps to compute Pearson Correlation using SPSS.
1. Identify the variable pairs of which you want to compute correlation. In the given example, I chose two variables named age and income 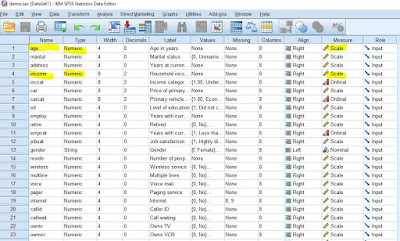 2. Note that the variable type should be "numeric" as shown in above picture.
3. Click on analyze, correlate and bivariate.

4. A dialog box appears as shown in the given picture. Drag the variable pair (e.g. age and income) on the box "variables". Chose whether the test is one tailed or two tailed. It depends on your research objective. Also, note that when you check the box "flag significant correlations", it will show extra information in the output if the association is statistically significant. 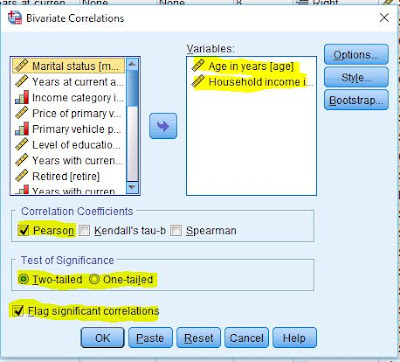 5. If you want to show the Means and standard deviation of the variables too in addition, you click on options and select the check boxes "Means and Standard Deviations" and "Cross-product deviations and covariances" 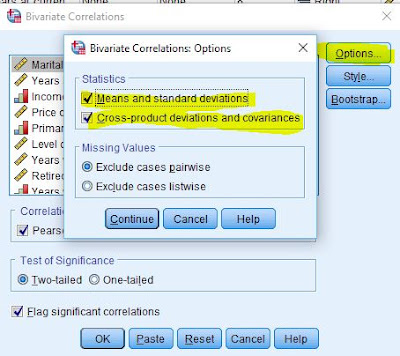 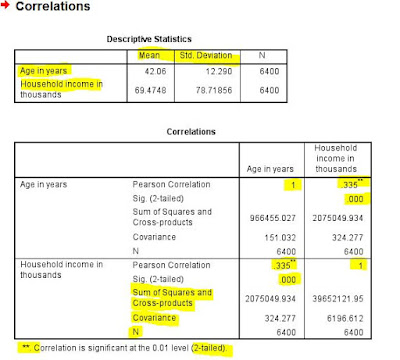 Interpretation of the output
7. From the above output you can see the two tables. First table is the descriptive statistics showing the means and standard deviation of the two variables. The second table is about the correlation between two variables. The correlation of the variable with itself is shown as 1 which is not the matter of our interest. Similarly, the correlation between the two variables is shown as 0.335 which is shown in two places (we can use any one of them). The P-value is shown as 0.000 which is of course less than 0.05 and even 0.01. It means there is positive linear correlation between age and income. The table also shows some extra information which we can utilize as per our need.
There is even a summary message below the table that explains that the relationship between age and income from a given example is statistically significant at P<0.01.

The following video shows the short explanation on the steps of calculating pearson correlation using SPSS.

Hope you enjoyed the tutorial. Please comment below for any queries or feedback. Also share if you liked. See you in the next tutorial!