Steps:
1. First of all, we should have the dataset with our desired variables of interest. For example, we can have a variable named "systolicBP_Pre.sav" which has the pretest data for systolic blood pressure. Similarly, we can have a separate variable named "systolicBP_Post.sav" which has the post-test data for systolic blood pressure. Now, we want to calculate whether there is effect of an intervention (e.g. anti-hypertensive drug) in reduction of blood pressure and test whether that reduction is statistically significant. 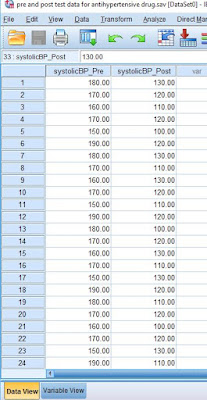 3. After that you see the following dialog box. 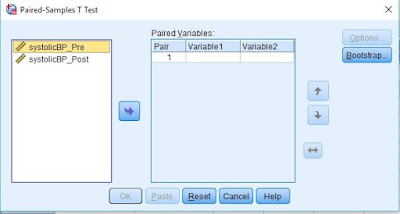 5. If you want to change confidence intervals, click on options, otherwise leave it as it is (The default CI is set to 95%).

6. Click on continue and and click on ok, then you will see the output showing the comparison of systolic blood pressure before and after intervention.

7. Interpretation of the output:


Good luck and see you all in the next tutorial!!