From above examples, you might have already guessed that it compares the mean value between two different groups. If we want to compare the means in the same group (e.g. before and after intervention), then we calculate paired-t test. 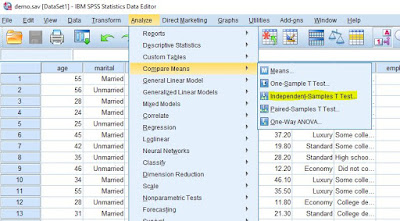 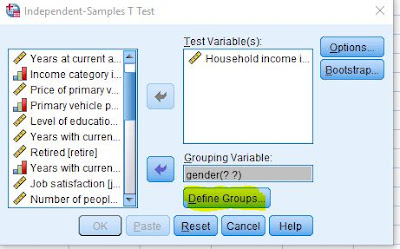 Step 5: Click on define groups and write the symbols/codes in the boxes for two categories of the independent variable which was used during data entry. (In the given sample data demo.sav, m denotes male and f denotes female; you might have your unique code in your dataset) and click on continue. 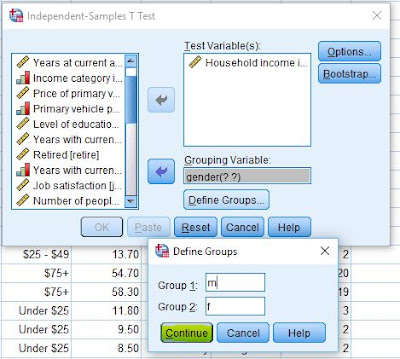 Step 6: After that you see the following dialog box. 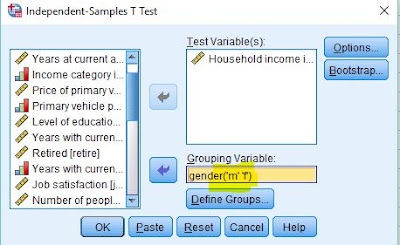 Step 8: Click on ok and you get the output as follows:

Step 9: Interpreting the output: From the given output, you can see that mean income of males was 81.56218 and that of females was 75.73510. Similarly, we can see the t-test value of 0.702 assuming equal variances and the same value assuming unequal variances between male and female groups. The P-values for Levene's test of equality of variance is 0.172 which is greater than 0.05 and so, we can assume equal variance between the groups. Similarly, the P-value is 0.483 (which is seen under the heading sig 2 tailed). We can also see the Confidence interval (CI) for t-test value.
We can conclude from the above table that the mean difference in income among males and females was not statistically significant. (as calculated P-value of 0.483 is less than 0.05 which is the usual assigned level of significance or alpha).

Good luck and see you in the next tutorial!!