In this tutorial we are going too discuss on frequency analysis under descriptive statistics using univariate analysis in SPSS.

In this tutorial, we are dealing with the first part of univariate analysis i.e. frequency calculation. To carry out such analysis, first of all, let us open the sample dataset (that is available in the installation directory when we install the software as shown in the following snapshot). 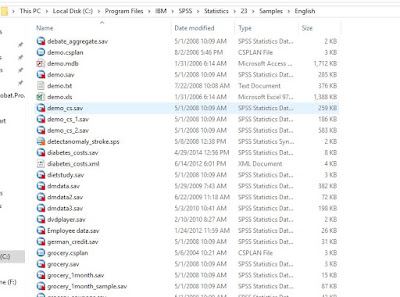 Let us try on “demo.sav” file from the installation directory. Remember that the SPSS data files have the extension “.sav”. We may also import files created in other software such as excel or notepad. We may also carry out the analysis in our dataset that we create after entering our own data (click here to see steps for data entry)

iv. A dialog box appears from which we have to select the desired variable from a list of variables and move to right and then click "ok". 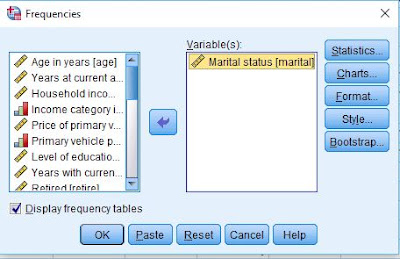 Optional intermediate step: We may also click on "paste" to generate the syntax before clicking on ok. That will open up the syntax editor window. But, if we want to directly create output without syntax, we may directly click "ok". However, recording the syntax has some advantages like we can directly create output from syntax without repeating the entire steps in case we make some changes in our data set. Clicking on paste generates the following window: 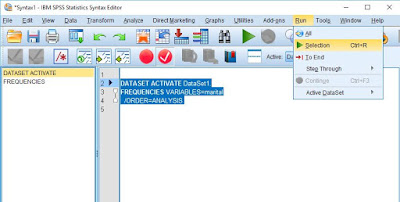 v. After that the frequency distribution table will be created in a new window which is called “output viewer window”. 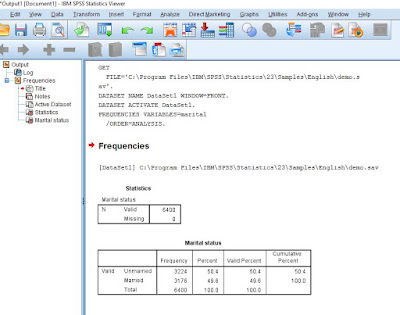 vi. The output can be saved for future reference and the tables can be exported to other software such as Microsoft word or excel.

vii. Interpreting the output: In the output, frequency is the number of observations of a category. From the above figure, 3224 is the number of unmarried persons, 3176 is the number of married and 6400 is the total. Since there are no any missing observations, the value of "percent" and "valid percent" is same. "percent" is calculated out of sample size and "valid percent" is calculated out of total valid responses after excluding the cases whose responses for a particular variable are missing. The "cumulative percent" is the sum of all percentage values up to that category of a variable from top to bottom as shown in the picture.


Good luck and see you in the next tutorial.